Titre VO : Smoke Gets in Your Eyes

Titre VO
Smoke Gets in Your Eyes 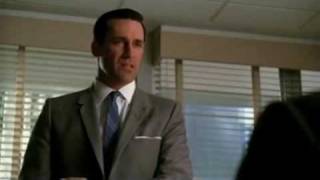 Inside a swank New York City bar, men in suits sip martinis and throw their heads back in laughter. Don Draper, however, sits alone at a booth and scribbles words on a cocktail napkin next to an ashtray of crumpled cigarettes. When a waiter comes by, Don - the creative director for Sterling Cooper ad agency - tries to convince him to convert from his choice of smokes, Old Gold, to his brand, Lucky Strikes.

"Reader's Digest says it will kill you," the waiter says.

"Yeah," Don pauses and looks around the room. Every hand at the bar holds a cigarette. "I heard about that."

That night, Don knocks on the door of a sultry artist, Midge. Despite her flirtations, he's all business. The trade commission has cracked down on tobacco health claims, and Don's without a plan for tomorrow's meeting to keep the Lucky Strike account from leaving the agency: "All I have is a crush-proof box and four out of five dead people smoked your brand." He asks to run some ideas past her but when she unbuttons her white blouse to reveal a lacy black bra, he decides to take a break from work for awhile.

The next morning, while Don suggests he and Midge get married, the revolving door of one Madison Avenue high rise whirls with businessmen. On the floor of Sterling Cooper, up-and-comer Pete Campbell - accompanied by an audience of three smooth-talking execs - speaks angelically on the phone to his fiancé. "I love you," he says, igniting chuckles from the men, whose only concern is planning a bachelor party. "I'm giving up my life to be with you, aren't I?"

Meanwhile, Joan - with fire-engine red hair and the perfect hourglass figure - introduces new girl Peggy to life as a secretary. Among other skills, Joan recommends showing a little leg, encourages her not to be overwhelmed by the typewriter's technology and offers her a doctor who prescribes contraceptives to unmarried women.

As the antacid fizzes in his glass of water, Don stands in his corner office. When he reaches to grab some weights, a purple heart - labeled "Lt. Donald Francis Draper" - falls to the floor. He puts it back in the drawer without much thought as Salvatore enters with a mockup of the new Lucky Strikes ad. It's a sketching of a bare-chested man next to a white box with a read dot. The word Relax is at the top. As Salvatore stares proudly at his handiwork and contemplates a pre-meeting drink, Greta - a researcher - comes in to share her report that people's desire for cigarettes is actually a Freudian death wish, and that if you love danger, you should love smoking.

"We can put a skull and crossbones on the label," Salvatore jokes.

Greta hands the report to Don who promptly files it into the trashcan. "I'll take that drink now," Don says.

When Peggy brings Pete into Don's office for their next meeting, he looks her up and down. "Who's your little friend here?" he asks.

On their way to a meeting with a Jewish-owned department store, Don offers Pete some man-to-man advice about how his playboy escapades - despite the fact that his wedding is this Sunday - will make it hard to climb the ladder. "You'll die in that corner office, a midlevel exec with a little bit of hair who women go home with out of pity." Pete's coy smile quickly faded as they walked into the boardroom.

Surprised to find a woman at the other end of the table - along with David Coen, a token Jewish employee from the mailroom - Don has little patience for Rachel Menken's demands to turn her store into the next Chanel nor her distaste for his less-than-innovative idea to offer coupons to housewives. "I'm not going to let a woman talk to me that way," he says as he walks out the door. As David reaches for the pitcher of bloody mary's, Pete follows closely behind Don to offer his superficial support.

"Having money and education doesn't take the rude edge out of people," Pete says.

Soon after, Don and Pete join Roger Sterling, the head of the company, in welcoming The Lucky Strike family to the office. While everyone coughs through smoke rings, Roger advises that they are no longer allowed to advertise that cigarettes are safe and opens the floor to Don's big idea.

Silence fills the room as Don fumbles through papers and stammers over his words. Pete jumps up to fill the void, and he offers up the "death wish" psychology from Don's trashed report. Shocked by the "you're-going-to-die-anyway" slogan, the Lucky Strike gentlemen get up to leave.

Just then, Don has an epiphany. "Advertising is based on one thing," Don says. "Happiness." Everyone else's tobacco is poisonous, but Lucky Strike's is "toasted." Within moments, the Lucky Strike folk are sold.

Back in Don's office, Roger encourages Don to reconsider the presidential campaign - the agency's got a young, handsome navy hero by the name of Dick Nixon.

With her first day nearly complete, Peggy thanks Don for standing up for her with Pete. She rests her hand on his. After an awkward moment, he removes it. "I'm your boss, not your boyfriend." He then chastises her for letting Pete go through his garbage to get the report but tells her that she has a fresh start tomorrow.

The young execs, led by Pete, hit the gentlemen's club and soon find themselves surrounded by girls. "I love this place," one of them says. "It's hot, loud and filled with men." Salvatore, his eyes twinkling as he scans the room, agrees.

Meanwhile, Don attempts to reconcile with Rachel, and she teases that the flashy mai tai nearly does the trick. When he asks why she's not married, she admits that - aside from wanting to have the option to be a businesswoman - she's never been in love.

"The reason you haven't felt it is because it doesn't exist," he says. "What you call love was invented by guys like me to sell nylons." Soon, she agrees to come back to the office.

The bachelor party long over, Pete shows up at Peggy's door. She asks why he came. He leans in, his lips brushing against her bangs. "I wanted to see you tonight," he whispers. Without a moment of hesitation, she lets him in.

It's been a long day for Don, and as the rain pours down from the night sky, he takes the train to a parking lot where he drives his car and pulls up next to a picturesque home. As he walks up the stairs to his bedroom, a woman - his wife - wakes up to greet him. He then crosses the hall and walks into the bedroom of his two young children. As he strokes their hair, he looks off into space.