S02E01 For Those Who Think Young

Titre VO : For Those Who Think Young 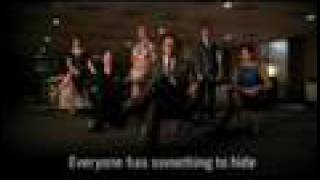 Don gets an insurance physical during which he lies about how much he drinks and smokes. "You live too hard," his doctor chides before prescribing phenobarbital to help Don relax.

At the stables, Arthur, an inexperienced, but handsome rider flirts with Betty and her friend Sara Beth who reasons, "He's engaged. There's no point in being aloof."

Back at Sterling Cooper, staffers await Don's arrival in the conference room. When Peggy, now slender, leaves to find him, the men speculate about whether Don got her pregnant then gave her a promotion as compensation. Pete thinks she went to a fat farm. On the office floor, Peggy scolds Don's secretary for making a glib remark about his whereabouts. "I want you to imagine when you talk about Mr. Draper that he is standing right behind you."

Unbeknownst to Peggy or his secretary, Don is having lunch (and a cocktail) at a bar; nearby a fellow patron reading Frank O'Hara's Meditations in an Emergency replies, "I don't think you'd like it," when Don asks about it.

Back at Sterling Cooper, Roger grills Joan about new her boyfriend. After she exits, Duck tells Roger the agency needs younger creative talent then implies Don is resistant to that. Roger encourages Duck to deal directly with Don about his concerns.

Finally arriving in the conference room, Don listens to pitches for Mohawk Airlines. The Indian puns annoy him. Instead of playing on the brand name, Don advocates tapping into the male customer's fantasy saying the ad should give "just the hint of a woman's thigh."

Later that evening, Don and Betty meet up for Valentine's Day at the Savoy Hotel. In the swank lobby bar, Betty notices Juanita, a former roommate accompanied by an older gentleman. "That is not who I thought she'd end up with," Betty remarks. Don tells her that the two are not a couple and that Juanita is a "party girl."

Upstairs in their hotel room, Betty emerges from the bathroom, in heels, stockings, and a bustier. "Wow," says Don, although later he can't pull the trigger in the midst of lovemaking. "I wish you'd just tell me what to do," Betty says afterwards. They order room service and watch Jackie Kennedy's televised White House tour.

Over at the Campbell apartment, Trudy becomes teary-eyed telling Pete that Harry Crane's wife is pregnant. "It's this big club they're all in together," Trudy says of pregnant women.

The next day, Francine tells Betty about the tour as if Betty hadn't seen it. "I'm sorry we missed it," Betty comments. "No time for television." When Betty tells Francine about Juanita, Francine gushes "Butterfield 8!" in reference to the Elizabeth Taylor movie about a call girl.

The next day, two young creative types enter Don's office. Harry wonders whether Duck made Don meet them to which Pete counters. "Nobody makes Draper do anything."

Joan, still debating where the new large copy machine should go, reprimands Lois for crying over Peggy's scolding. "There's a place to do that, like your apartment," she advises.

Their brief meeting with Don concluded, the interviewees depart. "I like the direction you're taking," Duck tells Don, who replies, "So, now that I've given you your babies and your Xerox machine, should I throw in a couple of elephants? I don't want there to be an excuse when you can't bring in Martinson's Coffee."

"Kids, what's the big deal?" Pete asks Peggy after more young talent arrives for interviews. "Do you want to have kids?" "Eventually," she replies.

Don finds the new direction for Mohawk too obvious. "Sex sells," Peggy responds. He disagrees. "You feeling something. That's what sells. Not them. Not sex." He plops his daughter's valentine on the table. When Peggy says, "What did you bring me, Daddy?" he approves. Back at her office, Peggy discovers the copy machine has been installed there.

That night, Betty's car breaks down. A mechanic arrives, but she's short of cash so she flirts so he'll make the repair at a discount. Once she's home, Betty fibs to Don about why she was delayed. Later that night he reads Meditations in an Emergency: "Now I am waiting for the catastrophe of my personality to seem beautiful again, and interesting, and modern." He writes, "Made me think of you. -- D" on the title page and walks down the street to mail the book to an unknown recipient.